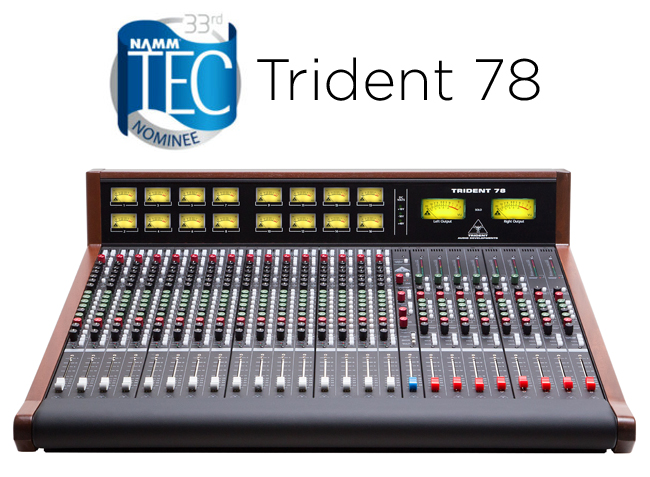 We are proud to announce that the 33rd NAMM Technical Excellence & Creativity (TEC) Awards nominated Trident Audio Developers for Outstanding Technical Achievement in the Small Format Console Technology category for the Trident 78 Console.

“We are very excited about this nomination. Our team has worked meticulously to create the uncompromised sonic quality of the Trident 78 Console and all of our products.” – Justin Hyatt, VP of PMI Audio Group, parent company of Trident Audio Developments

The annual awards are presented at The NAMM Show in Anaheim, California (January 27, 2018), the global gathering of music, pro sound and event tech industries, and celebrate the spirit of innovation, honoring the best-in-class products in the pro audio community.

Legendary frontman Geddy Lee from Canadian power trio, Rush comments about the closing of Le Studio in Quebec.  Rush, famously recorded a majority of their albums there on the Trident A-Range console.

“What Le Studio meant to us, is really hard to put into only a few sentences. It was not only a place where we did some of our best work, but we also experienced many profound personal moments there. To say nothing of the friendships that were forged there that still endure today. Le Studio played a key role in our album recording experience at a pivotal point in our career. We were already saddened to learn of its derelict state a few years ago, but upon hearing that it has now been destroyed by fire, it truly marks the end an age for the 3 of us,” remarked Geddy Lee on behalf of the band.

This year’s NAMM was a great show, thank you to everyone that came out and braved through all the rain.
We were very pleased to announce the launch of the new Trident 500 Series rackmount 10 space chassis. The Deca-Dent is now available to help you efficiently integrate your 500 Series modules into your workflow.  It offers an extensive set of connections via XLR, ¼”, and D-Sub as well as stereo linking features that you can take advantage of without the use of cables. The rack is also overpowered per slot so you can get the maximum performance from your modules.

Along with the new 500 series chassis we are also now taking preorders for the new Series 78 analog consoles. There was great interest at the show for this new console, we are looking forward to building all the preorders very soon.
The Series 78 consoles are an extensively featured all analog console with discrete class A preamps and Trident 80B EQ on all channels. In a slightly smaller package than the Series 88 consoles, the 78’s sacrifice no audio or component quality. With a streamlined feature set the 78’s have powerful routing, balanced inserts, full featured master section, and options that included transformer balanced outputs as well as fader automation.

This is the start of an exciting 2017, and we’ll have more to come. 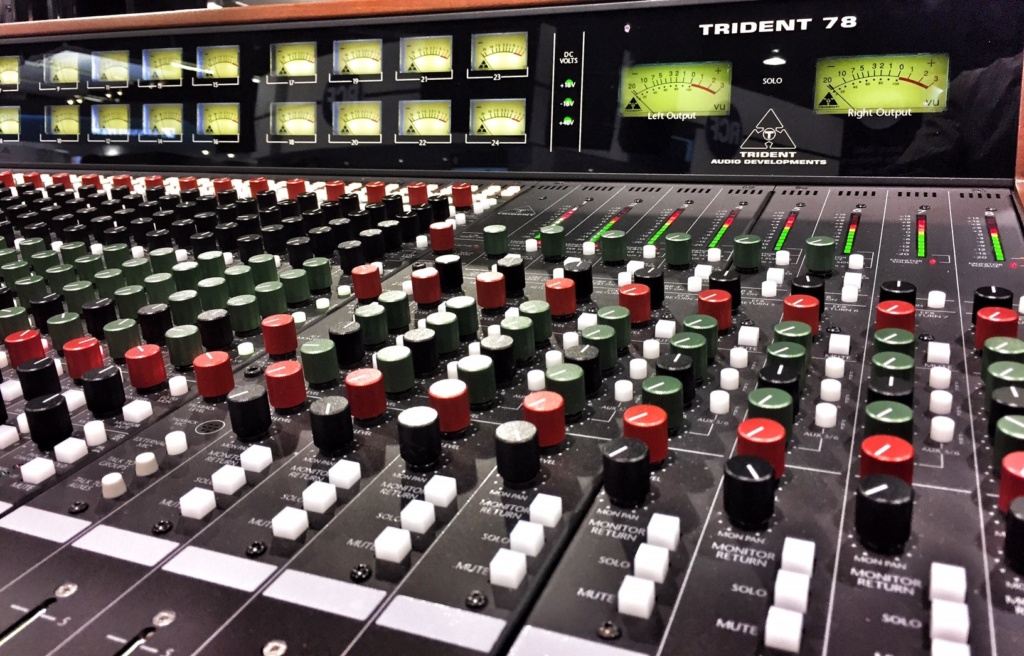 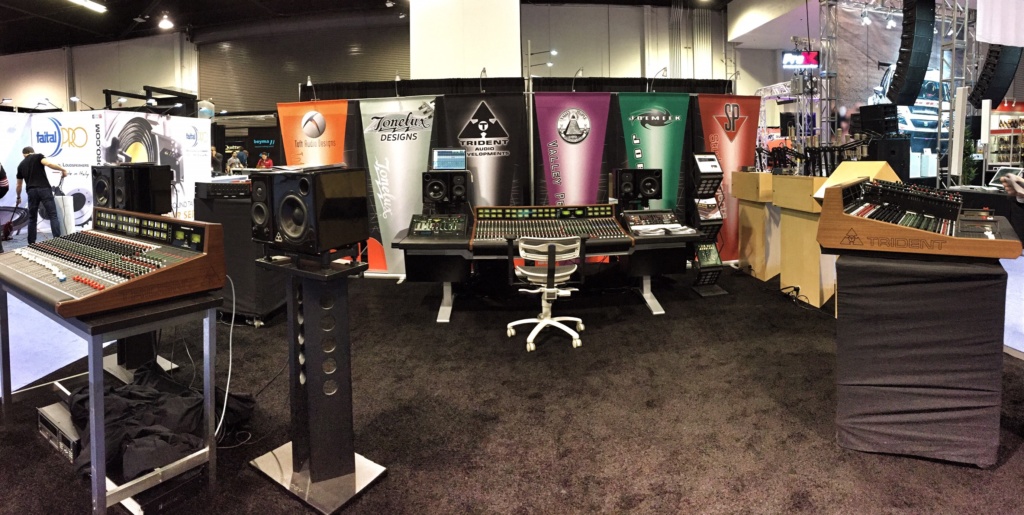 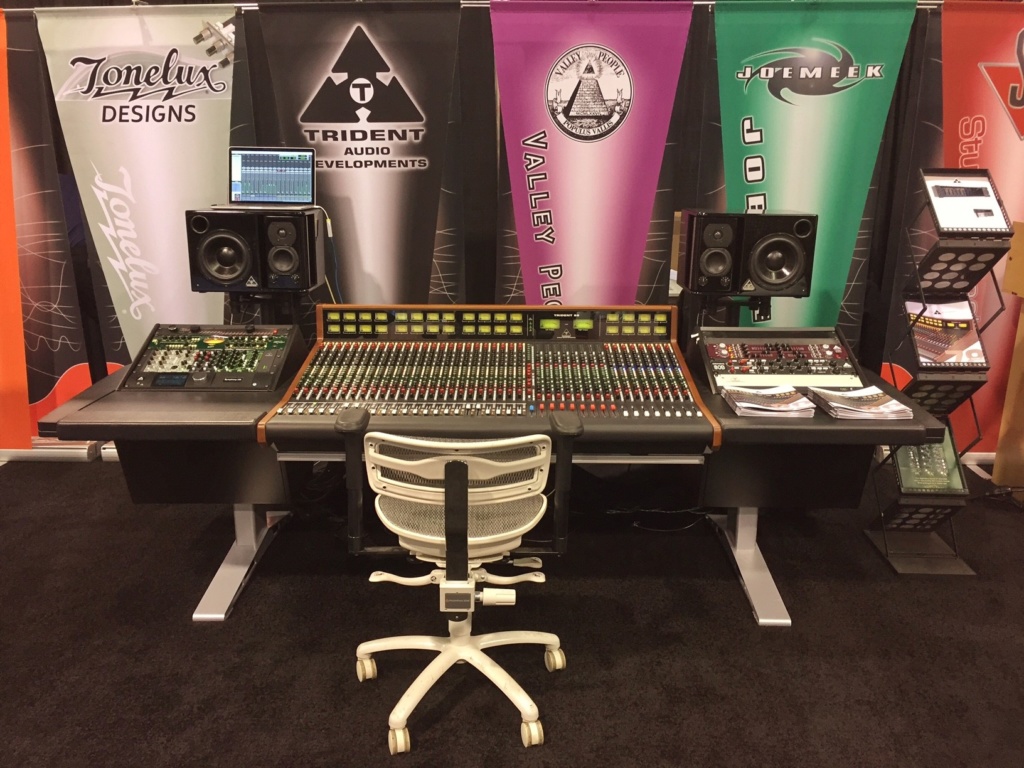 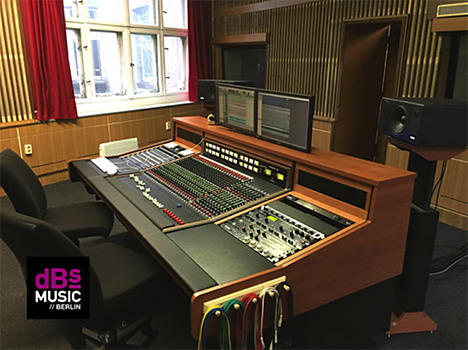 For almost 20 years dBs Music has provided innovative methods of delivering quality music and practices to willing students in the UK. Its newly founded Berlin center of operations was built with the intention of attracting a very open and innovative standard of student and staff body.

The specific location of the Trident 88 24 channel console is in one of their three tracking studios; called “The Funkhaus.” dBs Music Berlin Operations Manager, Zak Davies describes the Funkhaus in detail.  “It is the old GDR Radio station of east Berlin. Construction took place between 1955 and 1959 and was in operation until the fall of the wall in 1989. The facility was purpose built for radio production, including: two amazing orchestral recording halls (400sqm and 900sqm respectively), some amazing Foley rooms, mastering suites and a collection of amazing studios. All of these facilities still exist today and the facility is now open to artists and producers, with commercial studios in operation. This is where dBs Music Berlin houses its studio facility, giving our students fantastic access to amazing studios! We teach Recording practice, recording technique, studio workflow and mastering and critical listening modules using the Funkhaus.”

The choice to feature the Trident 88 at dBs Music Berlin came after a lot of research.  “Overall the Trident came out on top in all of our research, functionality, price, quality. As soon as we picked it up myself and our technicians just spent some time staring at it and moving faders, its a beautiful console and feels really nice to use! We have the VU meter 24 channel version, so after squeezing it through some corridors and doors we got it onto the custom built Zaor desk and hurried to set it up and get some audio running through it! We had some weeks to get to know the desk and its set up before the students arrived in September. It’s a big hit with both the students and staff and with a variety of projects happening in the studio daily, the Trident is definitely being put to work.” 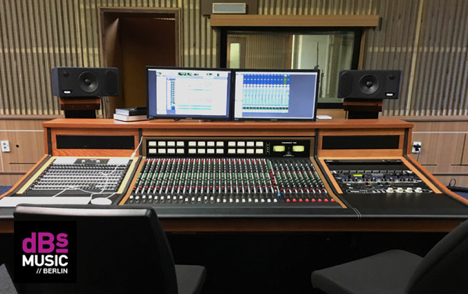 The biggest initial wow factor are the Trident EQs.  “Its all about the EQ’s, they have received high praise from anybody that has used the desk for a project! We also love the pre-amps of the desk. You have to hear it to believe it!”

“The Trident 88 has a very good layout and is exceptional in terms of design. The quality of the knobs and buttons makes the workflow very pleasurable. The most outstanding feature on it are definitely the EQs which make the desk an extremely powerful tool for a Sound Engineer to leave his own imprint in a recording session.” — Marco, dBSs Music Berlin Student

The new Trident 500 series 10 space rack is coming soon. Hosting some great features, like stereo linking and DSub outputs. The DECA 500 is a versatile and powerful 10 space rack. Providing ample power for each slot, you can be sure you’ll be able to take full advantage of all the gain your preamps have to offer. Growing in popularity the 500 series offers a great way to get pieces of the gear you really want in your outboard collection. Among these is the revered Trident 80B EQ, one of the most sought after EQ’s.

With the full 80B EQ in 500 series format you can have the EQ right from the 80B console used on countless albums and artists. Including No Doubt, Cake, Puscifer, Anthrax, Talking Heads, Guns & Roses, just to name a few. 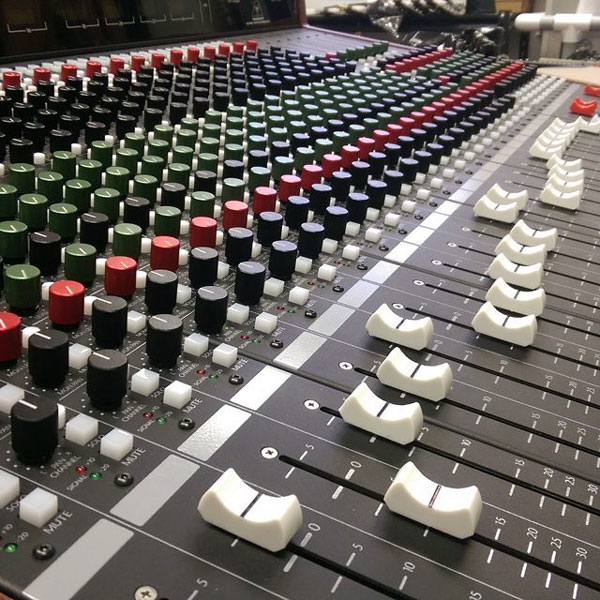 We have been putting a lot of time over the past year and a half into making a new Trident console.

This new console needed to be unmistakably Trident in sound, quality, and features. We are very proud of what has come together so far. Our beta board has gone together exceptionally well, with only 2 minor changes to implement for production. Which should be starting in the next few months.

As with any console, it needs to meet the needs of the studio. No exceptions. To meet the rising demand for analog mixing this new console has been designed to efficiently mix in any studio setting, and is mechanically laid out for a fast work flow while maintaining a full analog signal path.

We chose a smaller footprint for this console and trimmed the feature set of the Series 88 as our launching point. From the start it was our goal to make a console that would be more obtainable to the majority of studios looking to expand to or even replace existing analog mixing solutions. While still maintaining the core of a fully featured analog recording console.

Congratulations Tim on your Grammy Nomination

Producer/Mixer Tim Palmer, is one of alternative rock’s unsung heroes. In the early ’80s, Palmer worked as an assistant engineer at Utopia Studios in London, England, helping musicians like Mark Knopfler and Dead or Alive. In the latter half of the ’80s Palmer became a producer, and his keen ears and techni†cal knowledge contributed to edgy post-punk groups such as the Mighty Lemon Drops, the Mission, Gene Loves Jezebel, and the House of Love acquiring airplay on U.S. modern rock stations; Palmer gave the bands a radio-friendly sheen that didn’t modify their sound. In 1989, Palmer produced David Bowie’s debut LP with Tim Machine. Much of Bowie’s output in the ’80s was chastised for its slick pop, but Palmer emphasized Tin Machine’s scrappy guitars and thunderous drums, laying the foundation for Bowie’s artistic comeback in the ’90s, offering his skills to diverse and alternative groups like Mother Love Bone, Pearl Jam, Lames Catherine Wheel, Ned’s Atomic Dustbin, the Cure and Concrete Blonde. In 2000, Palmer mixed several tracks on U2’s ‘All That Can’t Leave Behind’ album.

“When I put together my mix facility called ’62’ I needed to have a flexible set up that could accommodate the new climate in our industry. I had a demo of the ‘Tonelux’ modular system and it was exactly what I needed. I wanted to embrace the old and the new. The ‘Tonelux’ summing amps let me keep a traditional analogue signal path, but with the control of the digital world. I am super impressed with the compressors, and EQ. The EQ has a classic crisp top end that is musical without being too pointed. The compressors are very flexible and the mix control of original and direct signal is a personal favorite of mine. To be honest, I feel I can be more creative in this environment, than in many top price studios.”

Check out Tim’s current works and ’62 Studio located in Austin, Texas at timpalmer.com