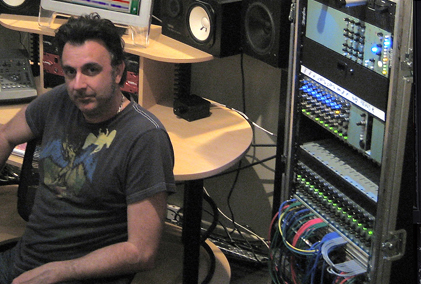 Congratulations Tim on your Grammy Nomination

Producer/Mixer Tim Palmer, is one of alternative rock’s unsung heroes. In the early ’80s, Palmer worked as an assistant engineer at Utopia Studios in London, England, helping musicians like Mark Knopfler and Dead or Alive. In the latter half of the ’80s Palmer became a producer, and his keen ears and techni†cal knowledge contributed to edgy post-punk groups such as the Mighty Lemon Drops, the Mission, Gene Loves Jezebel, and the House of Love acquiring airplay on U.S. modern rock stations; Palmer gave the bands a radio-friendly sheen that didn’t modify their sound. In 1989, Palmer produced David Bowie’s debut LP with Tim Machine. Much of Bowie’s output in the ’80s was chastised for its slick pop, but Palmer emphasized Tin Machine’s scrappy guitars and thunderous drums, laying the foundation for Bowie’s artistic comeback in the ’90s, offering his skills to diverse and alternative groups like Mother Love Bone, Pearl Jam, Lames Catherine Wheel, Ned’s Atomic Dustbin, the Cure and Concrete Blonde. In 2000, Palmer mixed several tracks on U2’s ‘All That Can’t Leave Behind’ album.

“When I put together my mix facility called ’62’ I needed to have a flexible set up that could accommodate the new climate in our industry. I had a demo of the ‘Tonelux’ modular system and it was exactly what I needed. I wanted to embrace the old and the new. The ‘Tonelux’ summing amps let me keep a traditional analogue signal path, but with the control of the digital world. I am super impressed with the compressors, and EQ. The EQ has a classic crisp top end that is musical without being too pointed. The compressors are very flexible and the mix control of original and direct signal is a personal favorite of mine. To be honest, I feel I can be more creative in this environment, than in many top price studios.”

Check out Tim’s current works and ’62 Studio located in Austin, Texas at timpalmer.com